When one of our friends first suggested camping at Margaret River during winter we were not convinced. Heading south of Perth at that time of year was guaranteed to be very cold. As there were many other families deciding to go we reluctantly joined in the hope of a fun weekend. Having a bunch of friends to share the cold made it a little more appealing.

The booking was made at Wharncliffe Mill Bush Retreat, which is set in Bramley National Park just a short distance from Margaret River in Western Australia. We came prepared for cold and wet weather, but most of all hoped for clear skies while we set up our tent. We have invested in a quick pop-up tent perfect for such occasions. The weather ended up being fine for the set up (and most of the weekend). The hardest thing was deciding on which way to face the tent (it was obvious in the end, looking out into the bush) and clearing the site of stones. 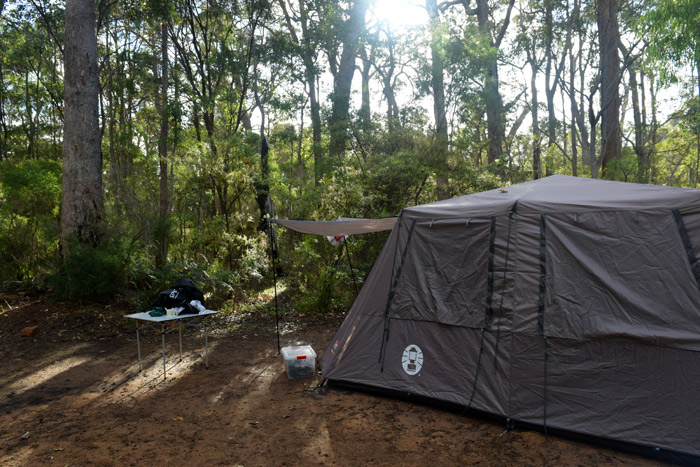 We chose to camp, but there are other accommodation options at Wharncliffe Mill, such as luxury safari tents, dorms, cabins and a lodge. The ease of the prepackaged safari tents with electric blankets on the beds are tempting for next time we visit in winter, though when we come back it may be in warmer climes. It was very cold in the evening as expected, but the log campfires helped to alleviate some of the cold. As there is a strict noise curfew after 9pm (we had to be warned), we used that to head back to the tent early and get layered up and snuggle into our sleeping bags. A hot water bottle certainly helped with managing the frozen toes.

The campground is located in a national park, and subsequently there are tight water and power restrictions. The solar heated showers were not too effective in the middle of winter. We waited until late in the afternoon to have a tepid warm shower, and the kids missed them altogether. The other option was some older gas heated showers with limited water pressure – either way we helped out to conserve water by having very short showers. 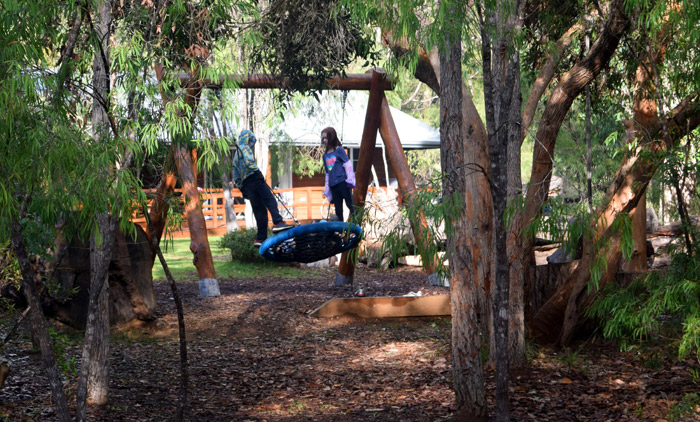 Other amenities included an airy undercover area with a table tennis table. The large shelter also included a fabulous well equipped communal camp kitchen, BBQs, and plenty of bench tables to share meal times. If you are not up for cooking, there is an onsite cafe, a short walk to a brewery, and a little longer walk or bike ride into Margaret River town for supplies.

For kids there is loads to keep them occupied. In addition to the bush playground surrounding us, there was the table tennis table, a nature play area with swings, and a sensory trail. Though for most kids, they simply played with sticks and dirt or went on a bike ride. In summer there are a couple of swimming spots in the river to cool off. 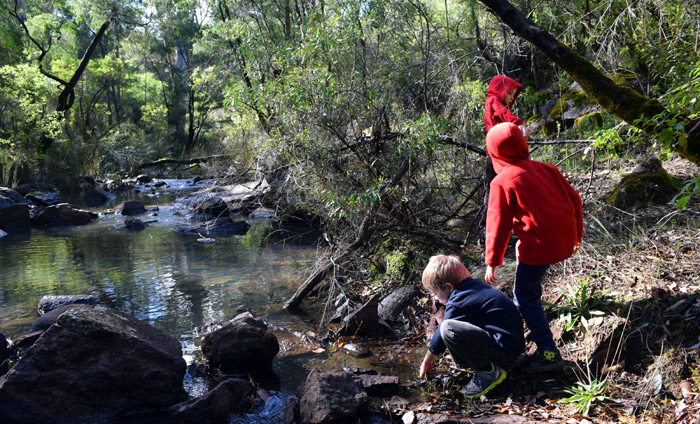 The best thing about being located in a National Park was the bush on our doorstep. There are numerous walking and cycling trails starting from the campground. For our first outing we took the easy 40 minute Old chimney Trail (which took us 1 hr).

The area is also great for mountain biking. For an easy grade ride you can take the Rails for Trails dirt track to Cowarumup, which follows an old railway line. For experienced riders try the Margaret River Pines, a series of higher difficulty tracks. If you don’t have your own, mountain bikes are available for rent at reasonable prices. Including family friendly options with seats and trailers for the little ones. 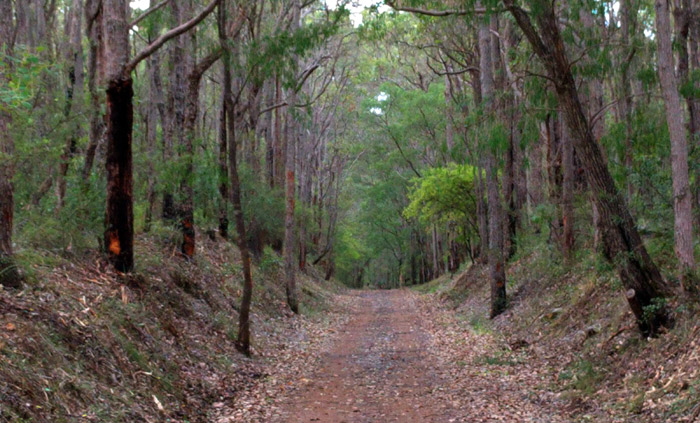 We were so glad we decided to go – we may have to reassess our reluctance for travelling outside of summer time. There is certainly plenty of experiences unique to cold weather travel, which means we can travel more often!