The final blog in the series about food from Italy is about everything else (we have written about Italian sweets and drinks already).

There is a fantastic food culture in Italy, and they are really passionate about their food. We love it too. Back home we eat a lot of Italian food, and it is not just because Clare is a quarter Italian. It’s because of their range of tasty yet simple family food.

They’re so passionate about their food, other cuisines don’t get much of a look in. Restaurants selling food from other nationalities were rare. We came across a few Indian, Turkish and Chinese restaurants, but nowhere near as many as we have back home in Australia, and not the range of other cuisines that we are fortunate to have. 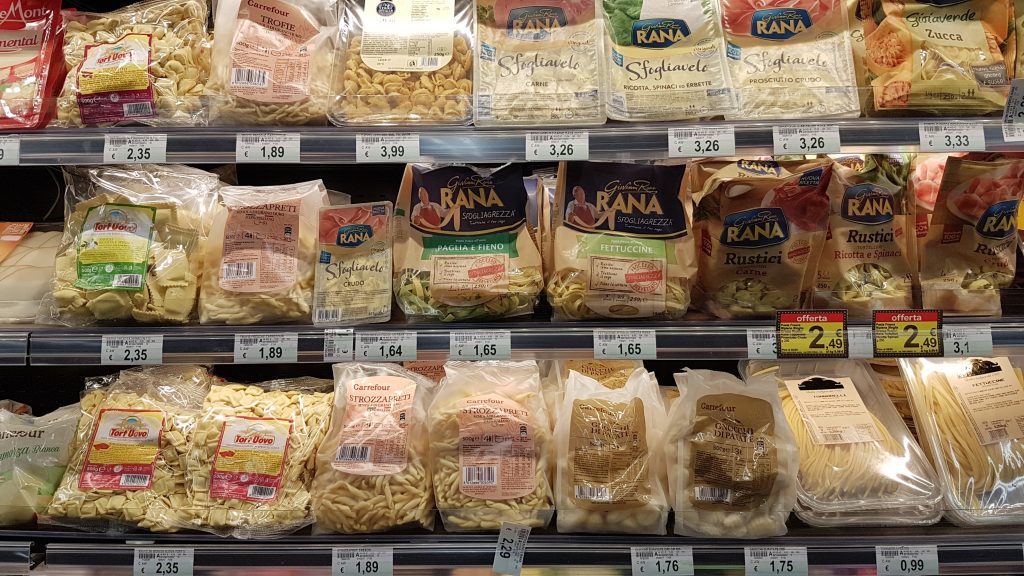 After eating Italian every day (we didn’t have much choice), we soon noticed the obvious – they have a complete obsession with carbohydrates. Much to Rob’s pleasure, carbs are the base of many of their meals and snacks (just think pizza and pasta). It would be very difficult​ to survive on a Paleo diet here! 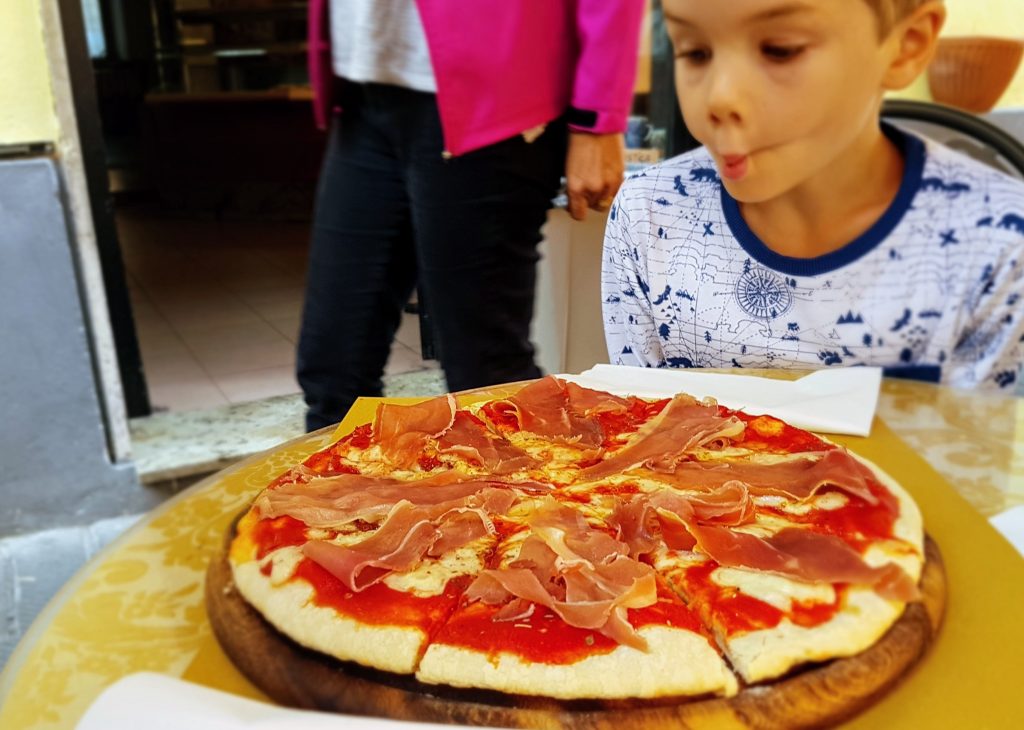 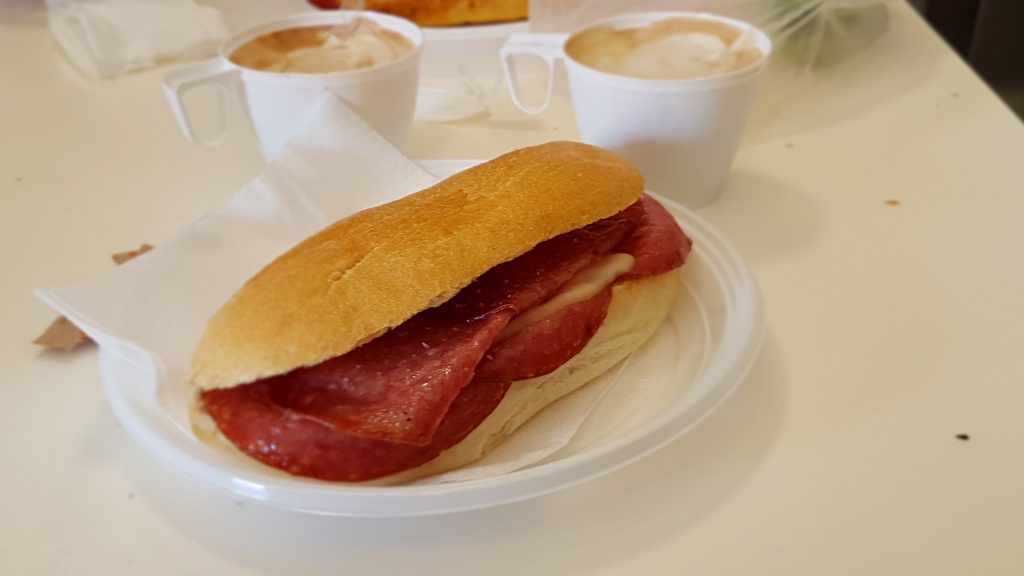 Food is traditionally served as courses, with pasta served as a primi piatti (first course), meat meals with salad or vegetables are served as secondo piatti (second course). Pizza is eaten at all times, we even tried out pizza bars where you choose by the slice, and pay per weight. 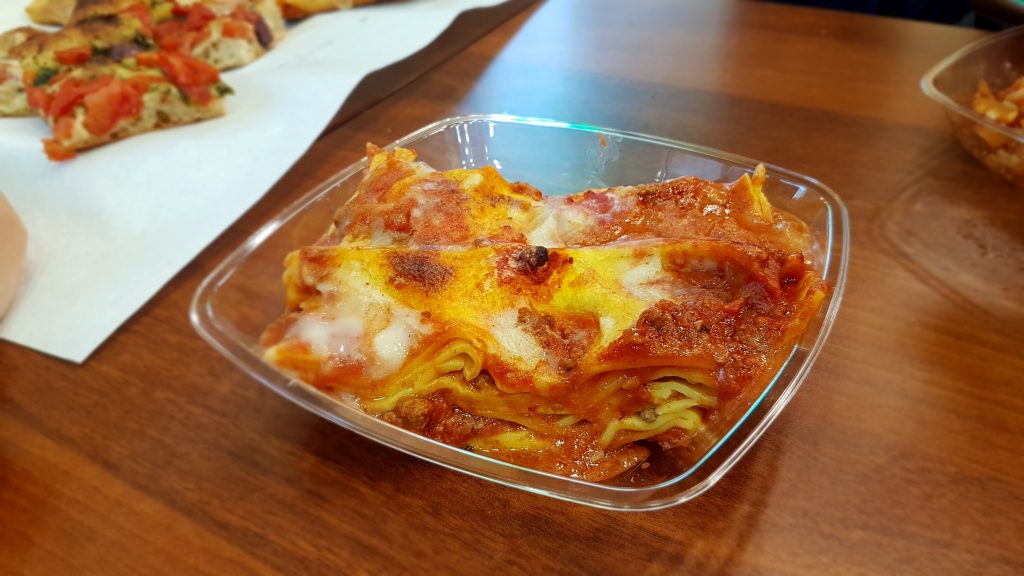 Pasta is traditionally made fresh (which is so delicious), often served with very simple sauces like plain tomato passata, pesto, carbonara, Bolognese, and arrabiata (tomato and chilli). 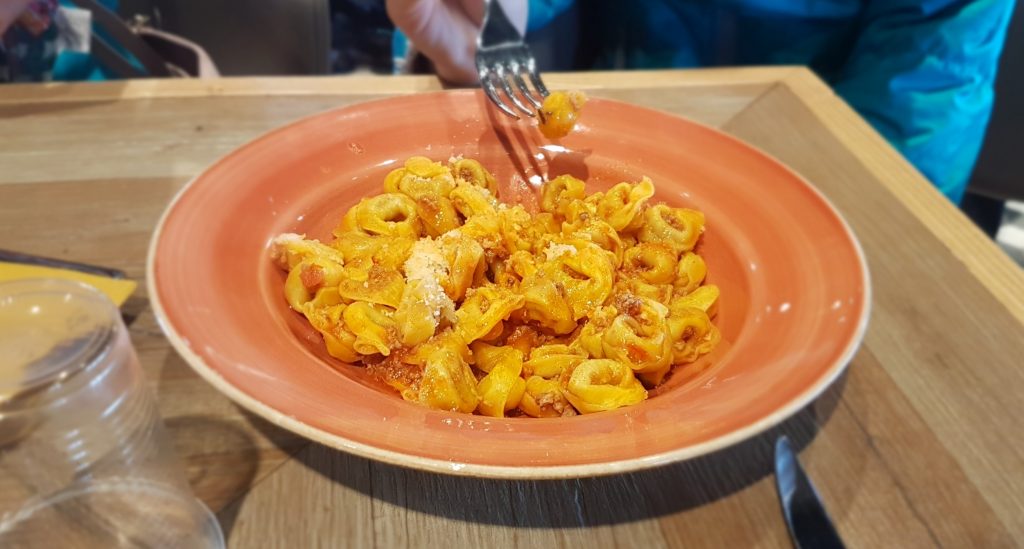 We have noticed quite different styles of pizza as we traveled around Italy. Just like at home in Australia, every pizza shop has a different style. Pizza in Rome generally had a thicker base than pizza further north, which can be served very thin. Toppings are often served very sparsely. 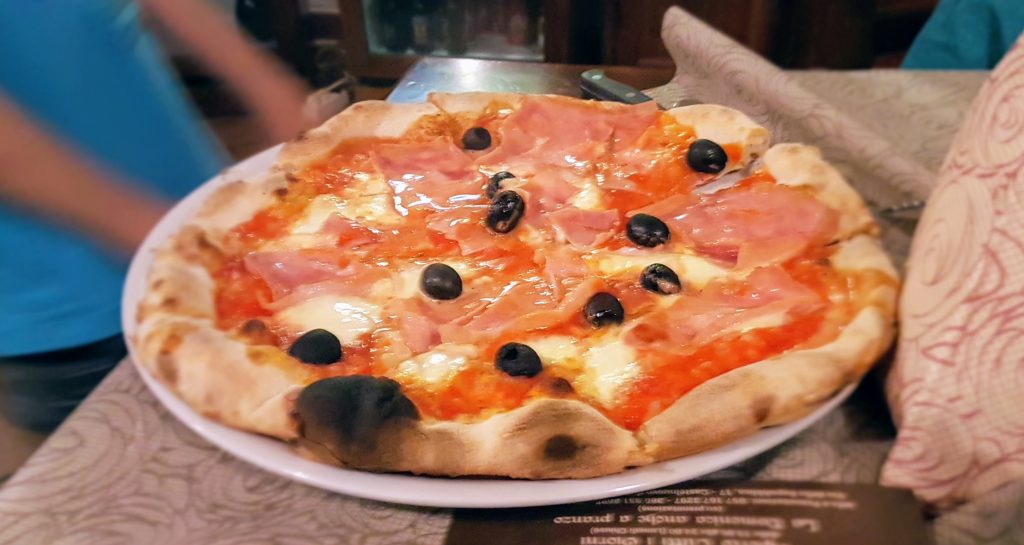 Specific cities or regions are known for specific foods, which are quite predictable based on the city names. Some examples are bolognese sauce from Bologna, and parmesan cheese and parma ham (we usually call it prosciutto) from Parma. Rob was keen to have a parma in Parma, but we didn’t stop as we drove past the city. Pesto comes from Genova, and even the shop bought jars are labeled pesto alla Genovese (same as in Australia). 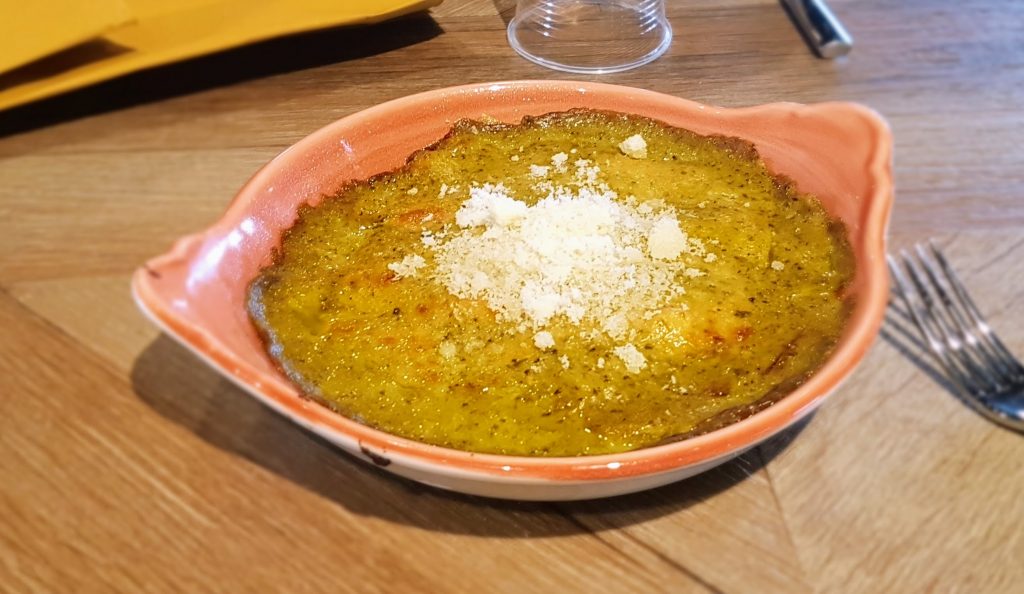 A really special treat was this pesto lasagna.

Risotto is a dish mostly found in the North of Italy. We love a good risotto, and it’s one of our favorite dish​es we cook at home, so simple and easy. The dishes we had here were much more al-denté than the way we prepare it, and we tend to add a lot more ingredients (like we do with pizza too). They tend to keep things simple, using fresh quality ingredients too maximise taste. 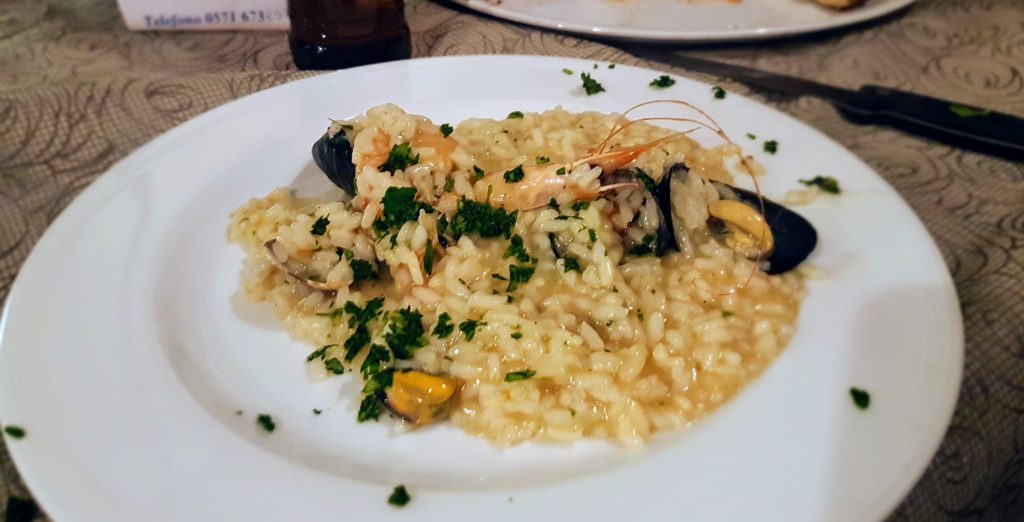 Arrancini is a southern Italian speciality. It is one of our favourite Italian foods, after we were gobsmacked by some that we bought on the streets of Naples many years ago. That delicious first bite has been etched in our memories. Maybe we were starving at the time, but we have loved it ever since. 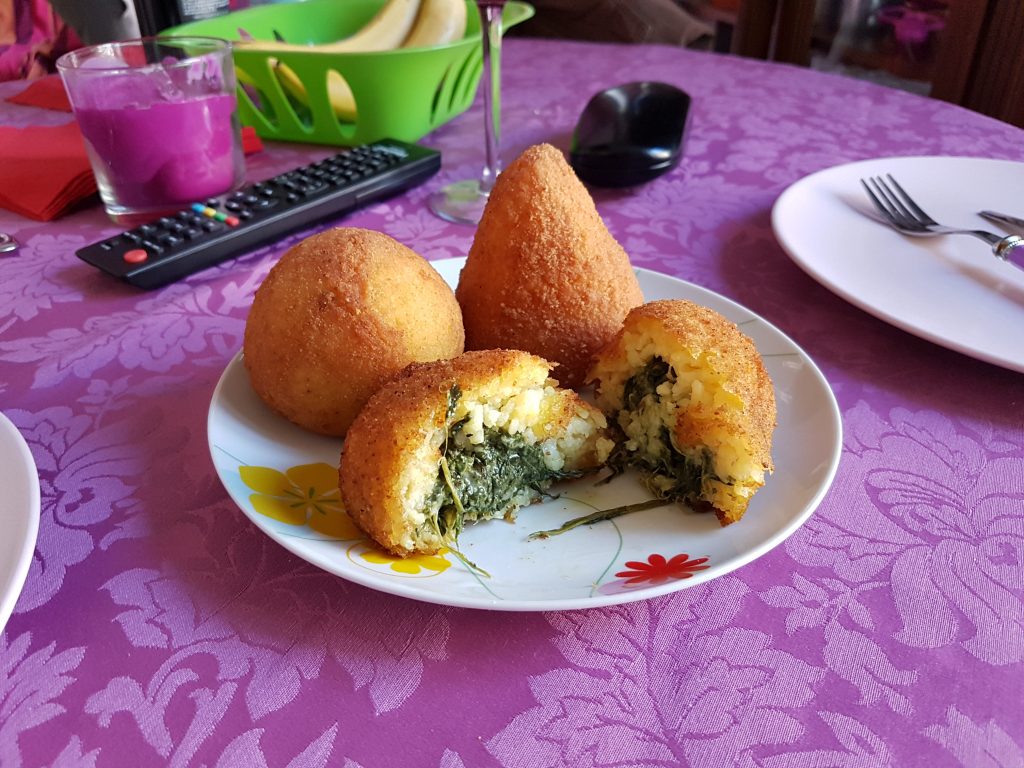 Arracini is made from arborio rice, cooked and rolled in a ball with a variety of fillings, then deep fried. They are all very different in shape, taste, filling, and rice cooking.

A specialty in Rome which had the locals lining up for was Bollito, boiled beef (in a tomato broth) chopped up, served in a bead roll with ‘green sauce’ salt and pepper and chilli. There is often a choice made with tripe, a favourite of the locals. We were not brave enough to try it, after a bad experience with a plate of tripe in a Zulu village in South Africa last year! 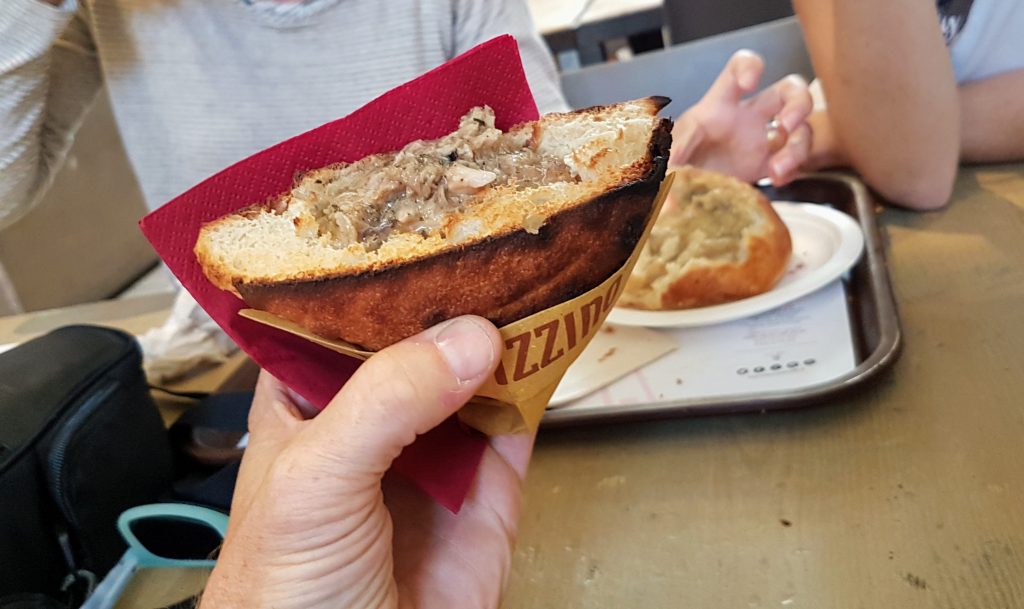 In addition to the carb rich foods above, there are many other foods that the Italians are well known for. There are single ingredient foods like olives, cheeses and cured meats, too many to write about. 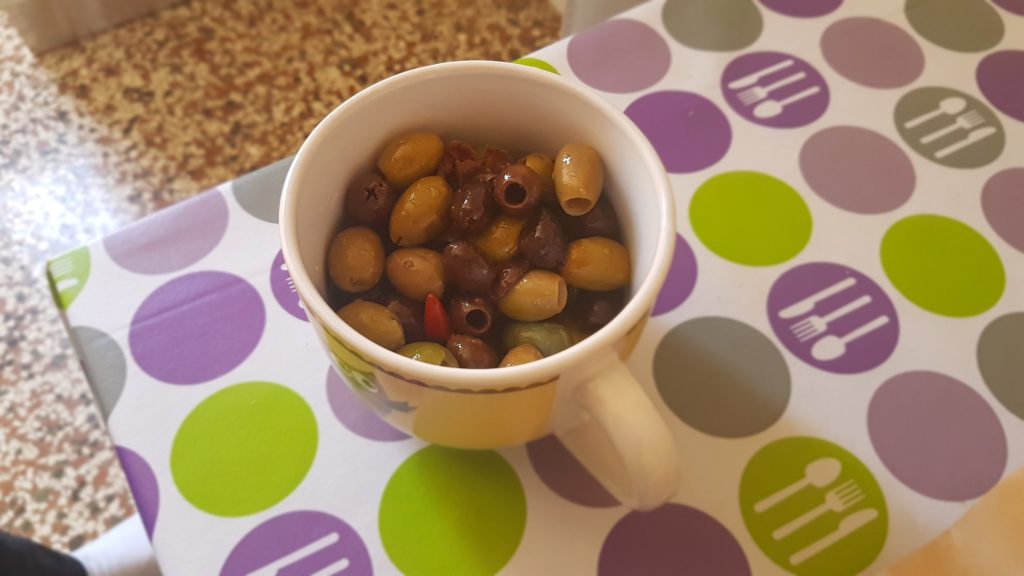 There are so many different things to try, the array is amazing. It was delicious trying some of the extensive choices. It’s a pity the kids were not more experimental!

We have enjoyed traveling through Italy again, and a significant reason for that is the food. It is very familiar, which is really comforting when so far from home, and nothing beats eating quality Italian food from it’s source.